Biodegradable plastic film has become an important issue in the packaging world.

Markets as well as consumers have become more aware of the negative impact that the packaging they use on a daily basis causes in the environment. With the premise of contributing to the improvement of the environment and meeting the needs of companies and customers, ALBIPACK has recyclable or compostable biodegradable film.

Biodegradable film is an alternative to conventional plastic film, but it shares the same fundamentals - protection, strength and quality.

The Biodegradable film is divided into two distinct categories:

• Biodegradable Recyclable - All layers of the film share the same composition and are 100% recyclable and ecofriendly.

Note: According to European legislation, 100% recycled film is considered to be biodegradable by 2023.

• Composting (PLA) - Composting can significantly reduce the volume of organic waste and the compost produced can be used in agriculture and horticulture. About 50% of all household waste is comprised of organic material. This percentage will tend to grow in the future due to the growing popularity of biodegradable products such as packaging.

The film PLA (lactic polyacid) has been replacing conventional plastics in several applications.

It can be used in bakery packaging, fresh food, etc.

In addition to its biodegradable nature, PLA film has other advantages, such as the adequate shelf life for most of the disposable packaging and the fact that this film is made from renewable sources - vegetables.

Compared with conventional plastic films such as polystyrene and polyethylene, the degradation period is minimal. The first ones take from 500 to 1000 years to degrade, while the PLA takes 6 months to 2 years, when discarded incorrectly. And, when disposed of correctly, it becomes harmless substances, since it is easily degraded by water. In composting centres, it takes about 45 days to degrade.

When small amounts of PLA go from food to food and eventually go to the body, there is no risk of harm to health, PLA converts to lactic acid, which is a safe food substance naturally eliminated by the body.

Forms of Presentation of Recyclable or Compostable Biodegradable Film:

- It exists in the metallic version

- It exists in the two-layered version (PLA | PLA)

- It Exists in the paper version Thermo weldable (compostable film)

- It exists in the PLA + Paper version, where it is possible to insert several types of windows with laser cutting system, in order to guarantee aesthetic precision. 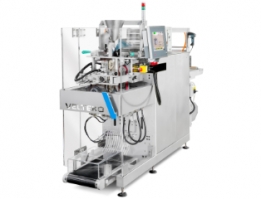 Albipack may use cookies to store your login information, collect statistics to optimize site functionality, and perform marketing actions based on your interests.

These Cookies are required to enable the site's primary functionality and are automatically enabled when you use this site.
These Cookies allow us to analyze the use of the site, so that we can measure and improve its performance.
They allow you to be in touch with your social network, share content, send and post comments.

Functional Cookies They save user preferences for site usage, so you won’t need to reconfigure the site each time you visit it.

Advertising Cookies They are used anonymously for the purpose of creating and analyzing statistics in order to improve the functioning of the website. They measure the success of applications and the effectiveness of third-party advertising. They can also be used to customize a widget with user data.